Our new(ish) forum is live at community.snowdrift.coop! 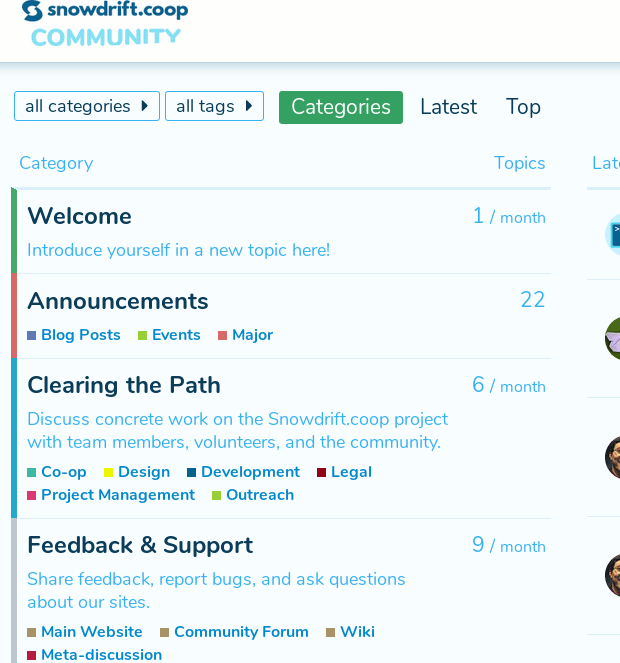 We use Discourse, the popular Free/Libre/Open forum software. It has great features and flexibility. The only real downside: heavy reliance on client-side JavaScript (with NoScript, it's read-only).

A quick overview of our setup:

At the Welcome category, newcomers can introduce themselves. We also have pinned posts there with other guidance for finding your way around and adjusting your preferences.

Within Announcements, we made an Events subcategory (by watching specific geographic tags you can get notified about regional meetups/conferences).

We discuss most of our work at the various "Clearing the Path" subcategories.

The forum itself has a lot of resources for learning your way around. Let us know in the Feedback & Support categories if you have any questions, suggestions, or other comments.

We made many adjustments to fit our ideals. Some highlights:

Read on for background history:

Our indirect path to this point

Many of the sidetracks we've taken over the years came from the communications challenges for a team distributed around the world.

When we first considered tools in 2013, we looked into classic forums like phpBB (and the dozens of similar options), but those were lacking in several respects. Discourse was brand new, and although it has matured well in recent years, it didn't seem then to fit the direction we wanted.

Seeing our analysis-paralysis, David (co-founder and tech-lead) just threw together a simple, threaded discussion board integrated with our main site. Our old discussion boards looked similar to Reddit or Hacker News, but we styled ours with better contrast, added avatar images next to posts, and more: 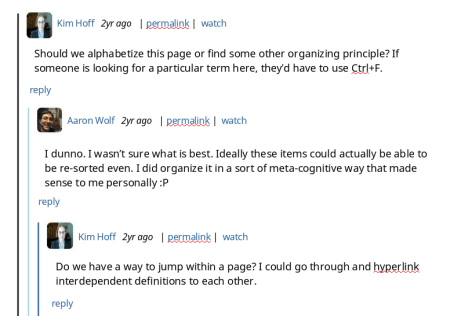 Over time, we added features such as:

A good portion of the tickets we marked in that system were about improving the system itself. We had visions of making it easier for other projects on the site to use our integrated tools (and avoid all the hassle we went through…). But we had fallen into producing discussion software instead of a funding platform.

When Bryan took over development in 2015, he felt that the discussion system code was too intertwined and messy. Not only was it a distraction, but it made work on the core site harder.

After some debating of options, he set up mailing lists with GNU Mailman (version 2). We moved our issue tracking to outside tools.[6] We backed up the old discussions boards and removed all the discussion stuff from our codebase.

The mailing lists were useful but did not fulfill all our needs. In general, mailing lists allow users to manage their own emails (what to keep, how to sort) while forums provide a centralized structure that everyone maintains together. Both approaches have pros and cons. We never used it, but Mailman 3 added a forum-like web-interface to have a more balanced approach. From the other side, Discourse is a forum first, but it has mailing-list-style options.

After we make our final announcements about the forum, we will shut down our mailing lists (though we plan to move the announcements list to CiviCRM). Thankfully, mail-archive.com retains public archives.

With Discourse, we can now edit, update, move posts, tag, organize, flag-and-hide conduct violations… Everyone can adjust their notifications on a per-topic, per-(sub)category, or per-tag basis…

Most of all, we get to be downstream of a robust, active project that other people work on — giving us more chance to focus on our core mission of building a better public-goods funding system.

We'll continue tweaking and updating our forum as we go. We'll also help upstream as much as we can. Maybe some day Discourse will use Snowdrift.coop for further funding…[7]